This article originally appeared in The Wall Street Journal on May 21, 2019. 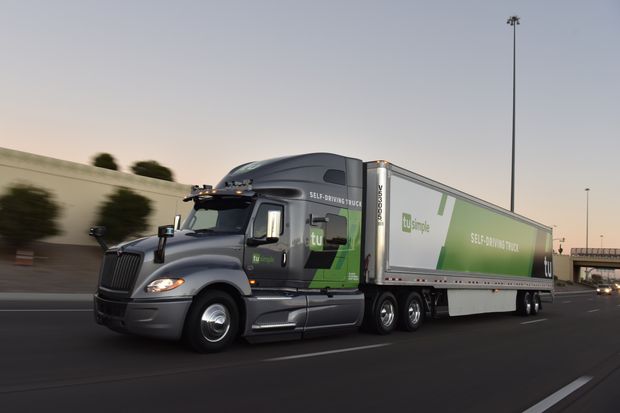 The U.S. Postal Service is testing self-driving trucks on a more than 1,000-mile mail run between Phoenix and Dallas, the post office’s first use of the technology for long hauls.

The move comes as investors and vehicle makers are spending millions on trucking automation.

The two-week pilot starting Tuesday will use big rigs supplied by autonomous trucking firm TuSimple to haul trailers on five round trips between distribution centers, the company said. The roughly 22-hour trip along three interstate highways is normally serviced by outside trucking companies that use two-driver teams to comply with federal regulations limiting drivers’ hours behind the wheel.

“This run is the sweet spot of where autonomy is valuable,” said Chuck Price, chief product officer at TuSimple, which has offices in the U.S. and China. “The vehicle can continue operating without the hours-of-service restrictions of a human driver.”

The Postal Service, which has been losing money for several years as letter volume has declined, is trying to restrain operating costs and is seeking ways to cut fuel expenses, improve truck safety and use its fleet more efficiently.

“We are conducting research and testing as part of our efforts to operate a future class of vehicles which will incorporate new technology to accommodate a diverse mail mix, enhance safety, improve service, reduce emissions, and produce operational savings,” a postal service spokeswoman said in an email.

Proponents of autonomous vehicle technology believe long-haul trucking, where operators say they have difficulty recruiting and retaining drivers, is a promising market for expanded useof the technology. Driverless vehicles have already been deployed in controlled industrial settings such as mining operations.
TuSimple’s technology uses cameras that the company says see more than half a mile ahead to spot emergency vehicles, pedestrians and road hazards. Relay teams of safety drivers and engineers will ride along in the company’s retrofitted Peterbilt trucks during the pilot, and will swap out when the vehicles stop at weigh stations or to refuel.

“The driver in the left seat is constantly eyes out of the vehicle, understanding what’s happening in the environment,” Mr. Price said. “The right seat is reporting to the driver what the autonomous system is detecting and what it is intending to do in the near future.”

The trucks will switch to autonomous mode on the highway for this pilot, Mr. Price said, although TuSimple’s technology allows “driveway-to-driveway” autonomous runs and its trucks navigate surface streets on delivery routes in Arizona for other customers.

TuSimple, which recently raised $95 million to expand its fleet of self-driving big rigs, is one of several startups developing autonomous truck technology. Many are working with manufacturers such as Daimler AG , which has said it plans to invest around $570 million in highly automated trucks and in March took a majority stake in Torc Robotics, which has worked with Caterpillar Inc. to create autonomous mining trucks.

A Swedish startup, Einride, began operating an autonomous electric truck this month on a short route on a public road in Sweden between a shipping terminal and a warehouse.

Did you know… Valley has an in-house trucking company.

Our asset-based fleet, CDS Transportation, provides transportation solutions for the logistics needs of shippers. CDS’s prime location with direct access to Interstates I-81 and I-476 interconnecting with I-80, I-84, I-76, & PA Turnpike puts you within one day’s travel of major metropolitan areas and two hours from Philadelphia, New York, and New Jersey.

Contact us to learn more about our transportation services.